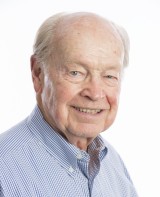 Stan Alexander has been involved in insurance since 1960, first as an insurance adjuster then sales. He spent 10 years with American Fidelity Assurance Company in Oklahoma City first as a disability insurance sales person and advanced to Oklahoma State manager.

In 1972, he and Bob Strunk founded the Alexander & Strunk Independent Insurance Agency.

While building the agency, Stan spent many hours in volunteer work. He was elected to the Village City Council and served 33 years as a councilman, 9 of those years as Mayor. Stan served in the Oklahoma House of Representatives of the 37th Oklahoma Legislature.

Stan served 26 years in the United States Air Force Active/Reserve and retired as a Lt. Col.

He was a member of Rotary for 45 years and served as President of North Oklahoma City Rotary. He also served on the Board of Directors of the Northside YMCA.

Return to the staff page.